Heat the olive oil over low heat. Add chopped onion and garlic and let it cook for 4 minutes. Add bell pepper and toss, add tomatoes and let it simmer for 10 minutes. Add fresh basil and put the soup through a blender, return to pot and add cream. Heat it up but keep it just under boiling, season to taste with salt, pepper and sugar.

The Verdict
Too much work for a pretty average soup. Besides, I tend to prefer chunky soups over creamy ones. My husband liked it though.
Posted by Maria at 2:42 AM No comments:

Sprinkle salt and pepper evenly over shrimp. Heat the oil in a pan over medium heat; add shrimp and bay leaf; cook and stir for 3 minutes. Add bell pepper and cook for another minute. Add wine and lemon to the skillet. Raise heat to medium-high and bring mixture to a simmer; cook about 3 minutes. Remove from heat. Discard bay leaf and lemon. Add butter, stirring until butter melts. Serve shrimp on rice with lemon wedges.

The Verdict
Honestly, I was a bit hesitant about this one, as I'm not usually one for cooked shrimp (I love it cold, but cooked not so much). It was absolutely delicious though! The smell was almost the best part - it smelled lovely exotic and as if I were in an Asian restaurant. There was neither enough garlic nor enough chili though, so I think I'll try to add some red pepper flakes and chopped garlic the next time. 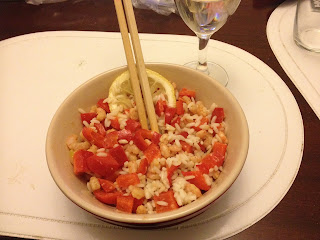 Bake the potatoes until done.

Heat the oil in a skillet over high-heat, add meat and cook until browned, add salt, pepper, chopped onion and garlic, chopped chili and bell pepper. Let it cook for a couple of minutes. Add tomatoes, spices and the drained beans. Let the chili simmer for 10-15 minutes.

Cut open the potatoes and pour over the Tex Mex chili. Serve with a green salad.

The Verdict
I quite often make nachos with a very similar meat sauce (only using ground beef instead), so it was nothing new in that respect, but I liked the idea of serving it over baked potatoes rather than nachos chips. Not a recipe I'm going to keep, but definitely an idea I'm going to keep.
Posted by Maria at 7:42 AM No comments:

The Verdict
I had my doubts about the amount of mustard, as it sounded like a LOT. It didn't taste like that much though, so obviously some of the other ingredients must have neutralised it. I'd only label the recipe as so-so though. It was okay, but nothing special.
Posted by Maria at 7:37 AM No comments: