Preheat the oven to 200C. Set a wire rack over a baking sheet to cook the chicken on (you can reuse the baking sheet for the bell peppers afterwards.

Prepare three plates - one with flour, one with eggs and one with breadcrumbs. Coat the chicken in first flour, then eggs, then breadcrumbs. Transfer to wire rack and bake for 25 minutes.

The Verdict
I added a teaspoon of thyme as well, and it ended up being too much. Don't know if it was the oregano, the thyme or the mix of the two, but I think next time I'll leave the thyme out.

I didn't add enough mariana sauce to each bell pepper, so some bites were a bit too dry. Next time I should use the entire jar - as it was, I had about 1dl left over.

Otherwise I liked it though. But it's a lot of work for something that didn't wow me, so while it tasted good, I'm not sure there'll actually be a next time. 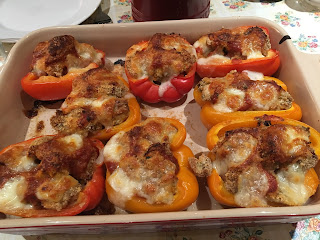