Mix together garlic, honey, sesame oil and soy sauce in a zip-lock bag and mix thoroughly. Cut chicken into stripes and add to the bag, shaking to ensure the chicken is coated. Leave to marinate for ~8hrs or overnight.

The Verdict
It tasted alright, but was lacking something... I might add some more spices (paprika or curry) next time, or try it with pork rather than chicken, because as it was it was just strangely dull. I had leftovers the next day and served those up as fried rice which was a LOT better, so it might just be something as simple as that, that was needed.

But honestly, I'm not even sure it's worth trying to make again. It's too similar to a lot of my other recipes. 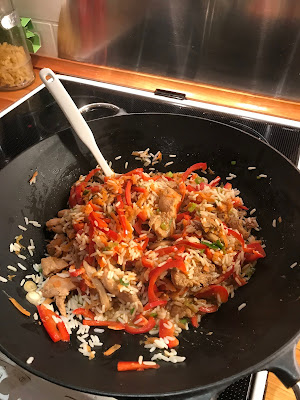