Add carrots, potatoes and celery to the crockpot.

Cut the meat into bite sized pieces and toss them with salt, pepper, paprika and any other spices that catch your fancy. Toss it again with enough flour to give it a thorough coating. Cut the bacon into pieces and cook in a pan over high heat until getting crips. Add to the crockpot. Heat some butter in the pan (if necessary) and quickly sear the beef on all sides (about a minut per side). Transfer the beef to the crockpot and reduce the heat to medium.

Cook the onion and garlic until soft and fragrant. Add the wine and stir up all the bits and pieces that might have gotten stuck to the pan. Transfer to the crockpot, and add the broth, wostershire sauce, tomato paste, mustard, bay leaves, rosemary and thyme.

Mix together corn flour and water and add to the sauce. Finally add the cold butter and stir until it has melted.

The Verdict
Seriously, this smelled AMAZING while cooking! DH came home and his first comment was, "Uhm! What's for dinner?" which is always nice :-D The taste almost lived up to the smell, but it was lacking... something. And neither DH nor I could quite figure out why. Might have been because I used dried herbs instead of fresh. Might also benefit from a bit of thyme and/or oregano... and perhaps a dollop of mustard. I also kinda want to try it with pork jowl (=svinekæbe) instead. Anyway, DH was very keen on me playing around with it some more - as he said, "It was good, but has the potential to be AMAZING", which is definitely enthusiasm enough for me to want to try to make this again. I'll keep this page updated with my attempts.

Edit: Tried this again a few weeks later with many of the changes I mentioned above. I.e. used fresh herbs insteady of dried, added some mustard, used bacon instead of cocktail sausages and added some paprika. Still not perfect, but a LOT better! Very yummy! 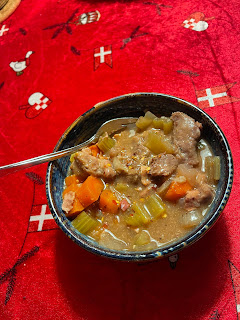