I've had this several times, but have never made it myself. I was feeling adventurous, so I figured it was about time.

The Recipe
3 egg whites
2 cups sugar
1 dessertspoon tbsp cornflour
1½ tsp vanilla
1½ tsp vinegar
3-6 tbsp boiling water (it really depends on the eggs... the mixture should still be really thick or the pavlova won't keep its shape properly. If you tilt the bowl, the mixture should be very reluctant to move. Better to add too little water than too much)

Beat egg whites until stiff. Add all other ingredients and beat well until THICK and fluffy.
Preheat oven to 250 deg C. put a tray near the top of the oven and put in pavlova (grease and then wet baking paper, then spread mixture on in one big or two smaller rounds.) Turn oven off and leave for one hour.
Don't leave for too long before removing from paper – this is the trickiest bit! But don't worry if it breaks a bit – cream and decoration cover it all up!

The Verdict
I had no idea how much a "dessertspoon" was, so I guessed a teaspoon, and think that may have been a tad too little - in any case, the pavlova flattened while in the oven and didn't get quite as nice and tall as it ought to have been. It still tasted great though, and was a LOT easier to make than I had made myself believe.

Oh, I couldn't find regular vinegar in the supermarket (I know!), so I ended up buying cherry vinegar instead. A lot more expensive, but it tasted great! :D

ETA: Made this again with a tablespoon of cornflour instead of just a teaspoon and it turned out perfectly. So very chuffed about that :) 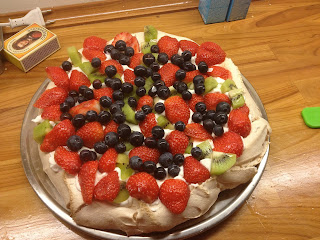