Slice roast beef into thin strips (I found it easiest to cut them with scissors) and add to the onion/mushroom mixture. Allow to cook 5-10 minutes.

Bake for 15-20 minutes until the cheese on top is golden brown.

The Verdict
I served this with garlic bread, which was fine, but another time I might try to cook a cup of rice and mix it with the onion/mushroom mixture - just to make for a more filling stuffing. Also, I think I'll add another onion and another clove of garlic... either that, or use a tiny bit less meat.

But that aside I really liked it, and will definitely be making it again. I think it would work well with other types of meat as well. Easy to make and tasted great :) 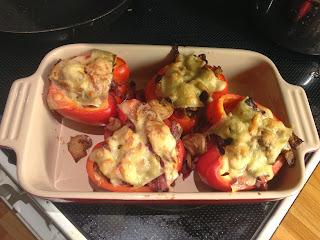