Eggnog has (as far as I know) never been a tradition in Denmark, so apart from an Eggnog Latte at Starbucks in London a couple of years ago, I've never had it. I got talking with a friend of mine about that the other day, and decided to hunt up recipes. Reading through them, I realized that it was basically pre-frozen homemade ice cream with alcohol added! As I was making homemade ice cream yesterday anyway, and thus had all the ingredients at hand, I figured I'd give it a try.

I know there are as many recipes for eggnog as there are households. This is the one I used. It was supposed to have both nutmeg and cinnamon in as well, but I'm not a fan of either, so left them out. If you have other recipes for eggnog that you'd recommend, I'd love to hear it :)

Whisk the egg with sugar and vanilla until white and frothy. Add cream and whisk a bit more - not enough to whip the cream, but just to add some froth.
Pour into a glass and add milk and alcohol. Stir and refrigerate for at least an hour to allow the ingredients to meld properly.

The Verdict
Very rich, very sweet, very yummy :) A very successful first attempt that I'll definitely try again. Next time possibly with slightly less vanilla, as I did find that somewhat overpowering... but that may just have been because I just whipped it in with the rest, instead of infusing the milk with it. I was too lazy to attempt any such thing ;)

I can easily see how it wouldn't be for everybody though. It's almost like drinking liquid ice cream. 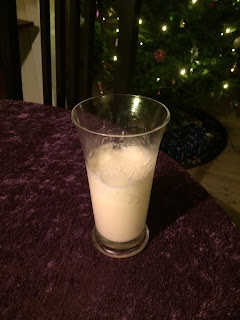