Cook the bacon until crispy and set aside.

Preheat the oven to 200C. Place the potato slices on a greased baking sheet, spray with oil, season with salt, pepper and cayenne pepper and bake until slightly golden - about 15-20 minutes. Leave to cool.

Toss the salad and serve with dressing of your choice.

The Verdict
Unfortunately I added too much cayenne to the potatoes, so they had a bit too much of a bite and could've been more crispy. Other than that I really liked it though. It's a lot of work, so I probably won't make it that often, but it's a nice alternative. 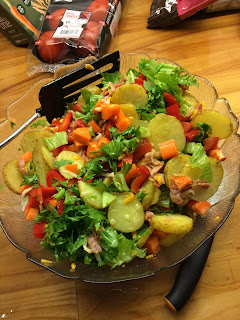