Peel the potatoes and cut them into thin fries. Mix the corn starch and water in a bowl and whisk until the corn starch has completely dissolved. Dump the fries in a few at a time and put them on a rack to drip.

Meanwhile heat the oil over high heat in a thick-bottomed pot. You want it REALLY hot or the fries will boil rather than fry. Once it's hot enough, put in a handful or so of fries - you don't want to overcrowd them. I found I could do about 15 at a time. Don't be tempted to turn down the heat - I did, and it meant an entire batch was boiled rather than fried. Still tasty, but not really what I wanted.

Cook each batch of fries for about 5-7 minutes until golden brown. Move to paper towels to let excess oil drain. Move to a plate and season with salt, pepper and whatever spices you fancy.

Oh, as for boiling some? In the photo below you can clearly see the difference between those that were boiled (top) and the ones that were properly fried (bottom). 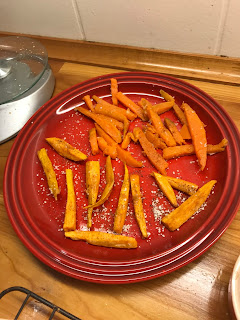