The Recipe
(Serves 2 who aren't too hungry)
1 thick pork chop, bone-in (the one we got was about 1lb including bone)
1 small, crisp apple, deseeded and chopped finely
1/2 small onion, chopped finely
2 cloves garlic, chopped finely
1 celery stalk, chopped finely
30g bread crumbs
2tbsp chicken stock (or just plain water if it's too much hassle making up that little stock!)
rosemary, salt and pepper
butter and oil for cooking
1tsp maple syrup
1tsp mustard
A pinch each of salt, pepper and rosemary

Warm oil and butter (about 1tsp of each) in a pan. Add apple, onion, garlic, celery, breadcrumbs, chicken stock, rosemary salt and pepper and cook until the onion's soft and the bread crumbs are slightly brown. Put aside and leave to cool.

Once cool enough to handle, cut a deep "pocket" in the pork chop and stuff as much of the filling into it as you can get. Discard the rest (or serve it on the side - whichever).

Mix together maple syrup, mustard, salt, pepper and rosemary. Rub each side of the pork chop with the marinade. Heat a bit more oil in the pan, reduce to medium heat and cook the pork chop for 4-5 minutes on each side to get a nice, crisp coat. Transfer to an ovenproof dish and cook in the oven for 20-30 minutes depending on thickness of pork chop.

Cut in half, tossing a coin (or playing rock, scissor, paper, lizard, spock!) to see who gets the bone.

Serve with potato fries and some greens.

The Verdict
Really, really good! Definitely something I could see myself making again, as the meat was nice and moist, the flavours worked really well together, and it wasn't even that complicated to make! I've adapted the measurements somewhat, as the first try had waaaay too high a ratio of bread crumbs. I think this works better. You could even leave out the stuffing completely, and just use the marinade for ordinary "thin" pork chops. It's a nice variation to the usual honey-mustard marinade. 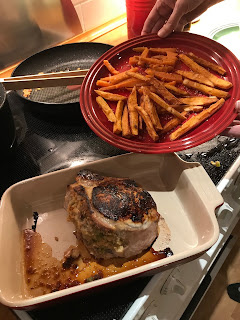