The Recipe
(serves 2 as a main course)

Cook the bacon in a pan over medium heat until nice and crisp - about 5-10 minutes. Set aside the bacon and drain the bacon grease from the pan (I only got about 1 tbsp - you might get more). Add the onions and half the garlic and saute until tender and fragrant. Add the ground beef and cook until no longer pink. Mix in the ketchup, mustard, Worcestershire sauce, salt and pepper, simmer to reduce, remove from heat and set aside. Add the vinegar to the pan, deglaze it and then add 1 tbsp bacon grease, sugar, mustard, the rest of the garlic and season with salt and pepper and remove from heat.

Meanwhile, toss the buns in the oil / bacon grease and bake in the oven until lightly golden brown (about 10 minutes).

Toss the lettuce and tomatoes along with the pan sauce dressing, beef, bacon, croutons and cheese. Yes, it looks like a lot of cheese, but it works :)

The Verdict
SO GOOD!!! Even my husband loved it and asked for left-overs the following day (drat! I had hoped to keep them all for myself!). Really delicious and definitely something I'll be making again. The substitutions worked perfectly and I can't think of a single thing I'd do to change it or make it better. Definitely worth a repeat! 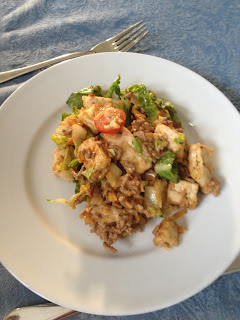