The Recipe
4 small chicken breasts
salt and pepper to taste
1/2 cup BBQ sauce (I discovered too late that what I thought was BBQ sauce was in fact BBQ oil! I don't think it made too much of a difference though)
6 cups lettuce, sliced or torn
1 cup cherry tomatoes, sliced in half
1 cup corn
1 cup black beans, drained and rinsed (I used chickpeas instead)
4 strips bacon, cut into 1 inch slices
1/4 cup basil, torn
2 pitas - cut into 1" squares

Puree everything for the avocado dressing in a blender until smooth. Store in fridge and finish within a few days.

Cook the bacon until crumbly. Put bacon aside, but keep the juices in the pan. Season the chicken with salt and pepper and cook over medium-high heat until cooked, about 4-6 minutes per side basting the chicken in the BBQ sauce as you go.
Let the chicken cool a bit. Meanwhile, roast the pita croutons in the reserved BBQ oil & fats until crispy.

The Verdict
The Bacon Double Cheese Burger Salad was better. I can't say exactly why, but something was missing from this, making it less than perfect. It might have been the chickpeas and that it would have been better with the beans instead. It was good enough for me to want to make it again, but not an instant favourite the way the BDCB salad was.

Oh, and there was FAR too much avocado dressing. I've tried freezing the rest in ice cube trays, not that I know if it'll be any good once they thaw, but I figured I might as well make the attempt and throw them out later rather than sooner :) 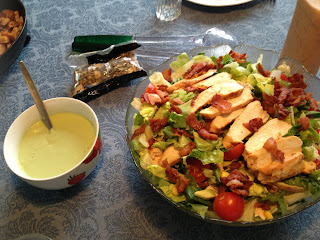