In a bowl, mix together first 8 ingredients (honey through pepper). Place the pork in the crockpot and rub it with half the mixture. Turn it over and rub it with the other half. Cook on LOW for 8-10 hours or on HIGH for 3-4 hours.

Remove the pork from the crockpot and leave to rest for 15 minutes. Meanwhile, mix together the cornflour and water and pour into the juices left in the crockpot together with the chicken broth. Cover and cook on HIGH for 10-15 minutes. Slice the tenderloin and return the slices to the crockpot so they can soak up the sauce.

Serve over mashed potatoes - you want something that can soak up the delicious sauce :-D

The Verdict
So, so, SO good! This was an instant favourite. I served it to DH and a guest and all three of us made spontaneous "Yuuuuuum!!!!" noises as we tried the first bite. Usually with a new recipe I like to tweak it a few times before it turns out exactly as I'd like it - not so with this one, it was perfect :-D

For my own future reference - mash made from ~1kg potatoes is only just enough for three people. 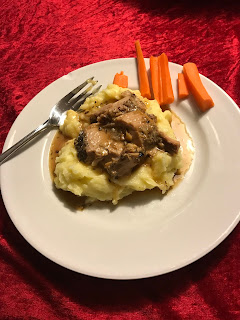