In a pot, cook bacon until some of the fat is rendered. If it doesn't seem to give off enough fat, add a bit of oil before adding the onion, potato and carrots. Cook for 3 minutes. Add the minced beef and cook until brown. Add garlic and bell peppers and cook for another 2-3 minutes before adding tomatoes, beef stock and paprika. Bring to a boil and leave to simmer for 20 minutes.

Just before cooking add salt, tomato paste and milk according to taste.

The Verdict
I used one can of tomatoes with chili instead of the paprika, but don't think it made all that much of a difference. I liked it well enough... not an instant favourite like some of the other soups I've tried, but good comfort food. DH liked it too, so I'll probably make it again :) 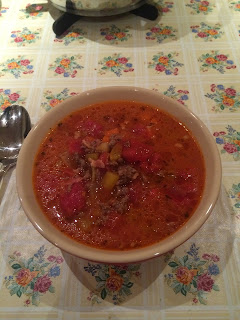